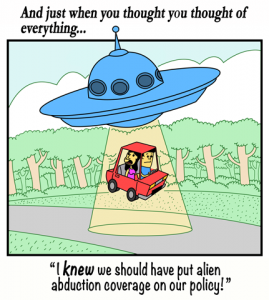 When it comes to covering assets, people take just about everything seriously. Whether you are a celebrity wanting to ensure your legs or chin are covered, or you are afraid of meteors and want your home covered from potential debris falling from the sky, there are options available to you. In fact, not only is it amazing the number of people who want policies for bizarre occurrences, but also how many people file claims equally as absurd.

According to TopTenz, one of the strangest types of coverage available out there is the ability to protect yourself from an alien abduction, should the event indeed occur. While some people may find this (literally) outlandish, others may see it as a sensible and preventative measure against loss. In fact, the source noted that some European providers have reported selling as many as 30,000 alien abduction policies.

However, when it comes to auto insurance, policies tend to run more basic. For instance, while the alien abduction could potentially happen from your car just as easily as from your home or on the sidewalk, the policy would only cover you, not the vehicle. Therefore, this instance wouldn’t be covered under an auto insurance policy.

“Dents from hail are different than those from a hammer.”

Though, according to Car Insurance Comparison, you could protect your vehicle against missile damage or rioting, most policies aren’t as inventive as home, life or body-part coverage. But even though these policies are more grounded, it doesn’t mean people haven’t found ridiculous items to claim.

For your enjoyment, below are a few auto insurance claims that people have actually filed in the past. Have a laugh, but be aware they have been used, so you should probably avoid them in the future.

Believe it or not, this isn’t how dents from hail look.

Block and Hyland Insurance had a claim filed by a policyholder in the ’90s noting the car was damaged by hail. According to How Stuff Works, hail would normally be covered by auto insurance, but not in this case. The reason? The dents from the “hail” were found to be made by a hammer when analyzed more closely.

Tramesha Lashon was a high school chemistry teacher who had a seemingly brilliant solution for helping out two students who were flunking her class: steal and torch her car in exchange for passing grades. In turn, Lashon would receive the insurance money. Needless to say, the plan failed, and Lashon was sentenced to 90 days in jail. She also lost her teaching job.

Sometimes, it’s not about what people claimed happened, but what they actually said. The following quotes are taken from real auto insurance claims, according to Daily News Dig:

“I started to slow down but the traffic was more stationary than I thought.”

“The other car collided with mine without giving any warning of its intention.”

These are only a few of the hilarious comments that people try to get away with on their auto insurance claims. If you are a vehicle owner, you should take your auto insurance policy seriously in the event of an accident or disaster. In the meantime, stay away from alien abductions and scheming teachers.

Transportation Calculation: Adding Up the Cost of Auto Expenses 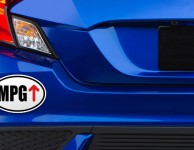 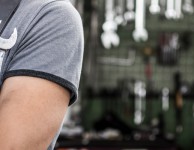 Money and Mechanics: How to Save Big on Car Care

A Road-Tripping Checklist for Car Safety